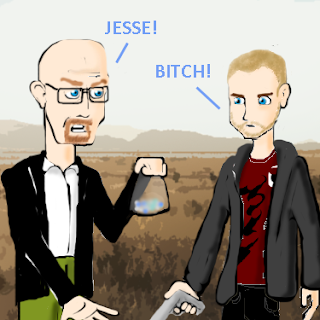 I haven’t written about Breaking Bad before now, because my recent obsession with the show is just that: recent. I watched the pilot many years ago, and was really turned off by it. It felt clunky and overly expository. I thought that, if a show had to spend so much time proving the legitimacy of the world, than this was not a show worth getting into. 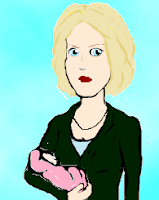 Boy, was I wrong. Over the past year, marathon viewing sessions of Breaking Bad have made me a much darker person, but they have also instilled in me a hope for television’s future. With a landscape populated with sub-par reality television and inexplicably popular CBS sitcoms, it was nice to see a show that was both a ratings hit (especially in the final, protracted season) and a critical darling. It was incredible to see a show that didn't f*ck around with the audience, that was constantly rewarding, and that didn't sacrifice character for story (with a few minor exceptions). It was great to see a series that wasn't so up its own ass that it was afraid to innovate and change, molding the narrative as it went along.  After years of Lost creators telling people that they had an endgame in mind when they totally didn't, it was nice to see a show that gladly flew by the seat of its pants when it came to breaking character and story arcs. This loose structure made it
Hit The Jump »

It's Time To Get Excited About the 'Into the Woods' Movie

Into the Woods is being made into a movie, and I'm very excited, and I'm sure I'll talk at length about it in the months ahead. But for now: 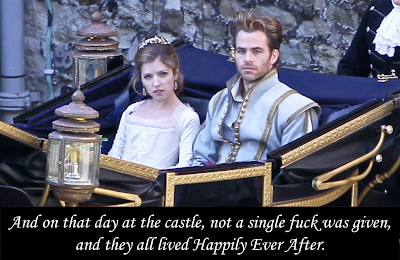 Email ThisBlogThis!Share to TwitterShare to FacebookShare to Pinterest
with: Anna Kendrick, Chris Pine, Empire Records, Into The Woods

Man, The Emmys Were Weird This Year 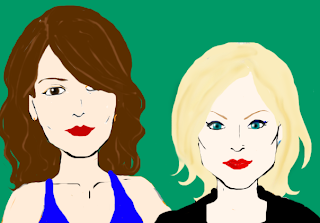 Be honest. You came here to see Tina Fey and Amy Poehler.

The 65th Emmy Awards rolled onto the tiny screen last night. It was a time to celebrate the beautiful, buxom, and big-headed stars of all of our favorite television shows. And also Modern Family. It was a weird night, with everyone trying really hard to show everyone that this is the Golden Age of Television. Except that all that posturing made everything seem all the more desperate.  Television is still relevant, and to prove that, here's Carrie Underwood singing a song by The Beatles. Because when you think The Beatles and Walter Cronkite, you think scripted television.

Other than being tonally inconsistent, this was also possibly the saddest Emmys in recent memory (I know that the Modern Family peeps made some reference to this, but I was too upset about 30 Rock/Louie's loss to really pay attention). There were a lot of great actors and actresses that died this year, and it's great to remember them, but the one-on-one eulogies were more painful than anything else. I didn't need to see Edie Falco's strong tears - why you play me like that, Emmy? Also, it's hard to swing back into comedy after seeing the JFK assassination, which was included in the broadcast because...TELEVISION!

At the very least, this was a very unpredictable Emmys, especially in terms of lady winners. Tina Fey won for writing, which is what Tina Fey should always win for, Merritt Wever gave a delightfully brief acceptance speech, Anna Gunn got some much-deserved love for Breaking Bad, and Julia Louis-Dreyfus proved that she is just better at comedy than anyone else.  Speaking of, it was a pretty great night for Veep and Breaking Bad, the former of which won two big acting awards (Whoo! Tony Hale) and the latter finally picking up the win for Best Drama. Also, The Hour won for writing, and I love that show and I miss it almost every day. Even Jeff Daniels' confusing win for the inscrutable Newsroom couldn't bring me down with wins like that.

Still, the last two hours were a bit of a drag, and host Neil Patrick Harris seemed off his game for the entire night.  We get it, people watch television on their phones. Hilarious. Oh, and you want to make a joke about Thai hookers when introducing the sisters Deschanel? Perfect.  Even with the increasingly odd parade of thin women that used to not be as frighteningly thin, there were a few moments that were pretty great. Will Ferrell's bit with his kids was cute, Amy Poehler and Tina Fey proved once again that they're just the best, and Sarah Silverman and Nathan Fillion were featured for seemingly no reason, but in a good way. It was the Emmys, so, even though it was terrible (nothing for Enlightened, still no love for Jon Hamm), it was still better than most nights, because America, and the world, got to spend a little more time with the pretty people.

Art Imitates Life or Vice Versa or Something

Well, it turns out that "Wrecking Ball," the Miley Cyrus song about a failed relationship that Miley kinda sings also kinda turned out to be prescient, since she and fiancé Liam Hemsworth called off their engagement today. Some people, who thought that their love was the true-true, will find this shocking. For those of us who thought that they broke up six months ago, it's mind boggling. For everyone else, it's Monday.

I'm In A Bit Of Creative Rut

I haven't been able to write a blog post in over a month. The words, they aren't coming. So, it's obviously time to...

The zenith and nadir of twerking (even though it was staged)...