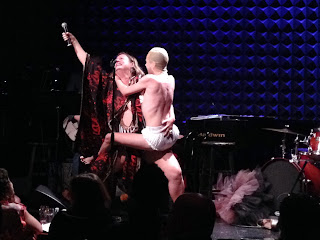 When I wrote my first 'My Pop Culture Weekend' back in June (!), I sort of had the idea that they would be a regular event - a way to showcase just how much I watch in a given 48 hours. However, I was so busy watching movies and television and listening to music that I kind of forgot to write about it. My bad. Obviously, the only thing that could break me out of this pattern was to have the MOST EPIC POP CULTURE WEEKEND of all time, which is what I had this weekend.

In theory I would list all the things that I watched and listened to and talk about how I feel about 'em, but there was really one event that made this past weekend so legendary. So, here's a quick list of everything else I watched/listened to: 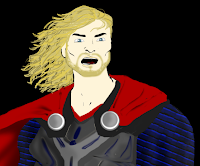 I'd love to tell you all about the things I saw, but there's no time. It's important that I tell you all about how my life got twist-turned upside down on this past Saturday night, when I went to a gala celebrating Joe's Pub's 15th Anniversary. There were cocktails, speeches, and Bridget Everett performing her new show 'Rock Bottom.' The show was spectacular - funny, lewd, deep. Bridget has an amazing ability to be a whole person on-stage, full of contradictions and layers. The whole thing is amazing. But honestly, it was difficult to concentrate, because I was sitting next to the most insane group of celebrities to whom I've ever been within coughing distance. Now, the next section is going to get very exclamatory, and you'll understand why when I tell you that, for the entire event, I was smack-dab between... Patti LuPone and Meg Ryan.

MEG RYAN! Meg flipping Ryan, America's onetime sweetheart and star of such acclaimed films as Sleepless in Seattle, Joe vs the Volcano, You've Got Mail (and other movies that Tom Hanks wasn't in), was sitting 4 inches from me. And PATTI! Eva Peron - spiritual leader of the nation! The voice that launched a thousand ships! And that wasn't all, if you can believe it. Sitting on the other sides of Meg and Patti (I call them by their first names because we're now good friends) were Kathy Najimy and Matthew Broderick, respectively. What kind of what!? (Patti LuPone's son was actually sitting between her and Matthew, but I don't know his name and I feel it's best to respect his anonymity)

Now, I know most of you are probably clutching at your breast, trying desperately to catch your breath, but please try to continue reading.  Now, Kathy Najimy was a welcome surprise to the table, for sure. Not only are Hocus Pocus and Sister Act defining movies of my life, but I am also possibly the world's biggest Veronica's Closet fan. It's one of the reasons I decided to move to New York and start my own successful lingerie company (one dream down...one to go). I was verklempt, to say the least.

Matthew Broderick is in an entirely different league. I had dreams of him one day being my brother-in-law, and I can't say that those dreams are 100% out of my system. Bueller?! So, it's best to just move on.

I made small talk with Meg about seating preferences and the cabaret scene in the 1970s. Like you do. Every time Patti laughed during the show, her head gently grazed my shoulders. It was phenomenal. Unfortunately, I couldn't find an opportune time to shove a camera in everyone's face, but trust me that it looked something like this: 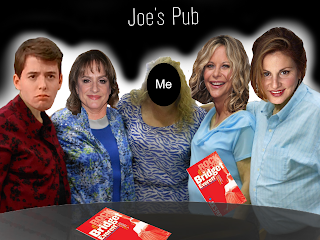 It was freaking magical. I honestly don't know whether anything else in my life will live up to this moment. I'm guessing no.