When Harry Potter and the Sorcerer's Stone hit movie theaters around the world, audiences were expecting a lot. Four of the books had already been released, and the series was only gaining in popularity. Stakes were high, which is why it's such a disappointment how much of a turd this film turned out to be.
First, though, let's talk about the things that director Christopher Columbus (of Home Alone fame, not discovering America fame) did well. His casting is spot on (sure, Daniel Radcliffe can't act, but he looks the part and he gets better over the course of the films).  Maggie Smith, Robbie Coltrane, Fiona Shaw, and Alan Rickman are all amazing. The real star, though, is Richard Harris, who played Albus Dumbledore in the first two films before he passed away, leaving large shoes that could not and were not filled. He plays Dumbledore with the perfect amount of manic wit, kindness, and generosity. Sure, he is not the Albus of the later books - the powerful and awe-inspiring wizard who strikes fear in Voldemort like no one else. Instead he's Albus Dumbledore the teacher, with a twinkle in his eye and a penchant for lemon drops, and he is marvelous. It's a performance that not only matches but exceeds the expectations of the loyal fan community. 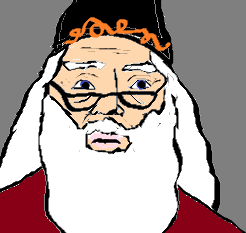 Columbus also does an admirable job of setting up the world of Hogwarts, with its moving staircases, Great Hall with magical candles and enchanted ceiling, the Quidditch pitch, and every other detail of the physical school. When Harry first sees the school from across the lake, there is a palpable magic and mystery that surrounds the school, and that credit is due in no small part to Columbus himself, who, like the same-named discoverer before him, does a great job of exploring the magical world through Harry's eyes.

Unfortunately, also like his namesake, he basically ruins the world that he discovers, casting a metaphorical small-pox blanket over everything. Though the film starts out magically enough, it quickly becomes mired in sight gags, strange directorial choices, and weird jokes that play better on the page than on-screen. Seamus Finnigan may be a great character, but he's odd in this movie, cracking jokes to seemingly no audience and really occupying space that could better fit Ron Weasley, who is supposed to be the comedic lead. Also, there are small moments that make absolutely no sense, like the Sorting Hat speaking aloud to the entire student body (and subsequently voicing Harry's Slitherin predilections to the entire student body). Even Quidditch, which is supposed to be amazing and is what many HP fans were looking forward to, is terribly filmed with bad CGI action mixed with random shots of Harry grimacing (or smiling, it's hard to tell). However, the most egregious error that many of the films in the series face is what I am calling The Hermione Problem 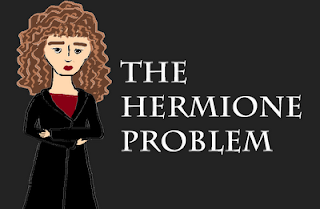 For some reason, Hermione is often given the weirdest and most extraneous subplots in the books, but they are usually entertaining and they always circle back to the main plot (her fight for House Elf rights carries perfectly into the resolution surrounding book 4, even if it's a bit slow getting there). However, in many of the films - and this one is no exception - Hermione's subplots or moments of interest are simply written out. I don't want to go on and on about female rights, but there is a serious lack of female characters in these movies. It's not good to silence the one main female character you have. Hermione is basically a fringe character in the film, popping up occasionally and then scooting away. This is most clear at the film's climax, when Harry, Hermione, and Ron travel through the school to protect the Sorcerer's Stone and along the way have to complete various tasks. Hermione's challenge is completely left out, apparently to leave room for the most giant and most boring cinematic chess game in the history of cinema. It's strange and makes her character seem all the more pointless (she does almost nothing in last thirty minutes of the film). Now that I think about it, even McGonagall gets the short end of the stick. Maybe I'll rename this problem in a later review, but I've already made the graphic so I can't change it now. Bullocks.

Another problem that pervades many of the films is the Added Action Sequence, or AAS. It's not always a bad idea to add tension and action in a HP film. It would be a bit dull to film the History of Magic classes, for instance. However, sometime an AAS is so completely fluff that it's difficult to look past it. The AAS in this movie comes in the form of Neville'ss crazy broom ride, which in the book isn't even a complete paragraph. Neville loses control of his broom, flie up twenty or so feet, falls, and breaks a bone or two. In the movie, though, it's an AAS that goes on for longer than it should and contains more terrible human CGI than The Polar Express (though thankfully it isn't nearly as creepy). The scene serves no purpose, isn't much fun, and makes people hate Neville, which should never happen...ever. This is an AAS that should be kicked to the curb.
Ultimately, Columbus sticks so closely to the book that it's even easier to pick apart the faults. He gets rid of Peeves and Professor Binns without many problems (and thank god he does), but his other false steps are not so easy to look past. He takes the words that came alive on the page and kills them when translating them for the screen. and really the film fails because it is so spectacularly dull.