I'm a pretty lazy person by nature. I'm less of a "carpe diem" man and more of a "sit at home watching marathons of Even Stevens" man.  So, when I found out that my cousins love and were good at reviewing movies, it only made sense that I exploited that as much as possible. And when I realized that they also like drawing pictures, well, the path was clear. So, without further ado, here is my cousins' review of Iron Man 3, the latest in the Tony Stark saga. It gets a tiny bit spoilery (no major reveals, but a few minor plot details are discussed), so you may want to wait until after you watch the movie to read.

Just as a bit of background, my cousins are 13 (Cousin #1) and 10 (Cousin #2) years old, and they kind of look like this:
Tableau: Iron Man 3 follows Tony Stark dealing with the fallout from The Avengers and getting back to his life as only he knows how: building a bunch of Iron Man suits, screwing up his personal and professional relationships (most notably with Pepper Potts), and battling a bunch of evil dudes. So, I guess the first question is whether or not you liked the movie?

Cousin #1: Yep, it was really good. The Avengers was great, and it was good to see that this movie could keep up the level of goodness.

C1: I liked the new Iron Man suit that he can sort-of control remotely. I like the new suits because they were all new colors and shapes, and the special effects were really great. Everything was really clear.

T: What was your favorite part?

C2: There were so many parts that I liked, but I really liked all of the twists and the turns in the story. I wasn't sure what was going on most of the time. It kept me interested. I liked not knowing much about the Mandarin (Ben Kingsley) or who he really is or what he's about. The whole movie confused you so you weren't sure who anybody is or what they want.

C1: I really liked the twists, too, but the plot kept twisting and turning and then the movie just ended. There were so many twists that it felt like everything before the final twist meant nothing.

C2: I'm not even sure what the movie was actually about, at the end. I'm not really sure what The Mandarin was planning, or what that Gilligan guy was up to.

T: You mean Aldrich Killian (Guy Pearce)? Yeah, I'll fill you in later. What was your favorite scene?

C2: I really liked the end battle with all the different Iron Man suits fighting and flying. It was really cool.

T: Yeah, Tony Stark (Robert Downey, Jr. - RDJ) isn't really in the suit for a lot of the movie, so it's cool when so many of the suits are involved in the final battle. Speaking of being out of the suit, how did you like Stark's trip away from California. 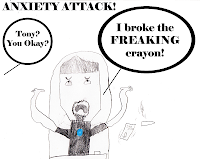 C1: I liked a lot of parts of the movie, but those parts in the middle were super boring. I get that he's sad and everything, but it's kind of boring to watch Tony do nothing. Also, he keeps fighting the same people over and over. There is a lot of time where nothing moves forward.

T: The plot certainly has a way of stagnating. Also, for a big chunk of the movie he is having anxiety attacks and fighting depression. How did you feel about that?


C2: The anxiety attacks were a good way to show how he felt deep inside. And that he was still dealing with the stuff that happened in The Avengers. I liked all of the times where Tony was all mopey, because it let him think about everything that he did, good and bad. The movie showed that, from the first movie to now, he changed from one Tony to another Tony, a better Tony. Still, he's dealing with the stupid things that he did in the past.  A lot of the bad things that happen in the movie are his fault, and that’s interesting.

T: Definitely. So, now that we've talked about the parts that we liked and didn't like, how about we talk about the stars of the movie. What did you think of RDJ and Gwyneth Paltrow (as Pepper Potts)?

C1: I really liked Robert Downey, Jr. Like, he wasn't as funny as he was in the other movies, but he was still really funny.

C2: He was cool. And I like Gwyneth Paltrow more in this movie than in the other movies. I didn't see Iron Man 2...

C2: That's what they say. Anyway, I didn't see the second one, but it was nice to see her do things in this movie. She was the head of a company; she was definitely in charge. Plus, she kicked butt, and she knew what to do and what not to do.

C1: RDJ is pretty annoying in the movie, so you need her to be there to make people like him. If someone as awesome as Pepper Potts likes you, you can't be all that bad.

T: And the Mandarin?

C1: Then never mind. He was good, though.

T: So, any final thoughts?

C1: It was completely unrealistic, but it was a lot of fun.

T: That's a completely true statement, and I don't think we have anywhere to go from there. Scores?

And now, a super spoiler-y picture from Cousin #1 that kind of spoils the ending to the movie but is still really awesome. Read on with caution: 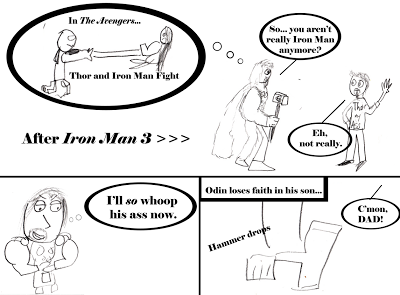