It's Halloween season, and hipster babies are out in full force! In anticipation of Halloween, Tableau Your Mind presents the scariest Hipster Baby ever.

ABC's 'Revenge' is So Sweet

With so many new and returning shows vying for my attention, it took me a while to make it to Revenge, the soapy drama on ABC. Granted, there was more than just my over-packed TV schedule that kept me away. The marketing, specifically, was pretty terrible, with Emily VanCamp in some sort of thorn dress that was apparently made out of anger?  Also, while I

The Hunger Games: I'm Starving for It!

I am a huge fan of The Hunger Games book series. I was late to the game (hah! puns!), admittedly - several years late. Still, being behind allowed me to read the entire book series all at once over the course of a very emotionally intense three days. It was just me, sitting at 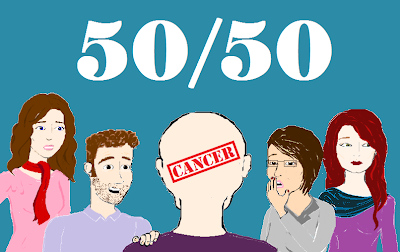 When I first saw the trailer for 50/50, the new comedic drama starring Joseph Gordon-Levitt and Seth Rogen, I instantly thought of another great cancer memoir: Cancer Made Me a Shallower Person, by Miriam Engelberg. In it, Engelberg talks about the awkwardness of cancer, the humiliating situations, and the anger that she felt. Of course, it’s all very funny, but it’s also strange that people rarely talk about cancer in so harsh a light. For every Laura Linney on The Big C, there are countless people becoming better people and rising above the illness on television and in film. It’s a powerful redemption/conquering adversity story, so understandably it’s told all the time.

Male cancer is even less often portrayed (by my count, there is Brian’s Song and, um, that’s pretty much it). That is why 50/50, a by-the-numbers yet refreshingly honest film, is so
Hit The Jump »