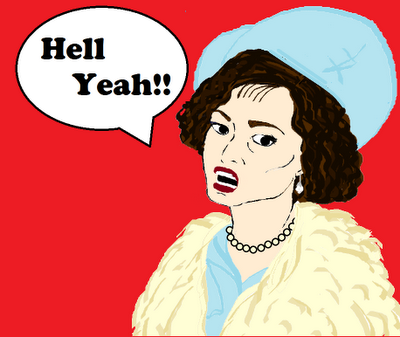 Email ThisBlogThis!Share to TwitterShare to FacebookShare to Pinterest
with: Helena Bonham Carter, The King's Speech

And the Winner Is... 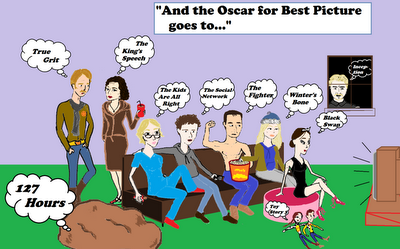 Just so you don't have to go through the whole site to find Tableau's reviews of the ten films up for Best Picture at the Academy Awards 2011, here are some handy links!

The Kids Are All Right 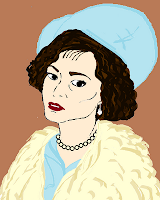 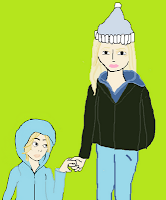 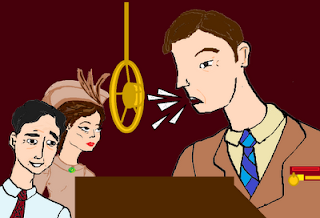 And we come to the end of the review bonanza with The King's Speech, which is probably the best film of the year and is favored to win Best Picture at the Oscars. At its heart, the film stands as a testament to classic film-making and story structure. It unfolds as any

The two films that lead the pack in this year's Oscar race are The King's Speech and The Social Network.  Both films have won numerous Best Picture awards, with The Social Network winning big at the Golden Globes and The King's Speech predictably kicking ass at this year's BAFTAs. The great thing about the films is that they are so vastly different, and occupy almost diametrically opposite ends of the film spectrum.

The Social Network succeeds mostly due to a cracker-jack script and brilliant direction. Aaron Sorkin creates a rich dialogue that is packed full of dense exposition that 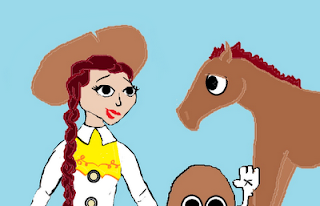 This is flat out the best film that will not win Best Picture at this year's Academy Awards. It's hard to feel bad for Toy Story 3, though, as it's a shoe-in for Best Animated Motion Picture (or whatever that category is called). Of course, the success and emotional pull of the film is built heavily on the critical and financial success of the previous films in the Toy Story franchise as well as the unbeatable force that is Pixar. We care about the characters in this film right away, no need to spend time on exposition or dialogue to establish these relationships. The audience is already invested. The filmmakers don't squander this goodwill, though, but rather build on it to create something completely new:

Even with ten nominees, there is still contention about which films are going to make it into the top spots. This year, Winter's Bone and 127 Hours seem to be the films that squeaked in a nomination in place of movies like The Town and The Ghost Writer (which probably owes its lack of a nomination to Polanski problems). This is actually great for the world, because now more people will see Winter's Bone, a stirring film with amazingly

True Grit is a really good film, and a particularly great western. It has all the elements of classic westerns: a villain that shows up at the end and isn't remotely humanized, shifting alliances, a man alone (or woman alone), an old grudge coming to the surface, vengeance, justice, and beautifully shot landscapes.  The dialogue is direct, clipped. Every character can be described as someone who doesn't suffer fools.
The acting is exceptional as well.  Jeff Bridges chews the scenery and steals scenes as only Jeff Bridges can.  Matt Damon is equal parts dangerous and bumbling, a combination

Of the films nominated for Best Picture this year, The Fighter stands out as the one where great acting stands way above the actual film.  Performances from Christian Bale and Amy Adams stand out, and quiet performances from Mark Wahlberg and the supporting cast provide a great backbone. The powerhouse performance of Christian Bale, who should deservedly is the front-runner for the Oscar, is certainly a sight to behold. Bale is known to morph physically and mentally for his roles, and here is no exception. Melissa Leo, whose strange antics and awkward off-screen persona (her hands in perpetual

Score One for the Beek!

As many people have probably heard, James Van Der Beek, better known as Dawson of Dawson's Creek, has landed a plum role in the much anticipated ABC pilot Don't Trust the Bitch (that title's definitely changing).  He co-stars with Dreama Walker (Gossip Girl, The Good Wife) and Krysten Ritter (Gilmore Girls, Veronica Mars, our dreams).  Van Der Beek plays a heightened version of himself, something that he recently did awesomely on Funny Or Die!  Even better, the role was originally written for Lance Bass.  So, we at Tableau are ready to give the win to Van Der Beek, whose ridiculous name belies an acting depth and soul we can't wait to see regularly on our computer screens. 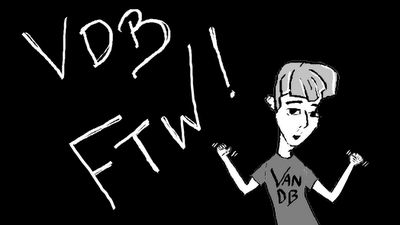 P.S. yes, we did just learn how to link to things on our posts.

[Spoiler Alert] Best Picture Nominees #4: The Kids Are All Right

Probably the quietest movie of the Best Picture nominees, The Kids Are All Right is a delightful film with a wicked kicker.  The casting director was clearly given the note "sullen" when picking out a cast. Even in the happier moments of the film, the characters

Like clockwork, every year people in love join together to celebrate the halfway mark of Black History month.  Has it been fourteen days already?  We at Tableau will be celebrating as well, opening up a bottle of Chablis, watching Youtube videos of MLK, Jr, and laughing about that time one of our uncles drunkenly confused Rosa Parks for Harriet Tubman.

Email ThisBlogThis!Share to TwitterShare to FacebookShare to Pinterest
with: Black History Month, Holiday

We here at Tableau wanted to show off our minimal drawing skills and amazing grasp of iMovie. We're basically ready for the Oscars:

Email ThisBlogThis!Share to TwitterShare to FacebookShare to Pinterest
with: Ellen Page, Film, Inception

This movie is everything you think it is. Beautifully directed, extremely claustrophobic, and, yes, gross.  But it isn't gratuitously gross, unlike the following photo:
It's a shame this movie overshadows the other Cramped-Fest movie Buried, in which Ryan Reynolds is stuck in a coffin and there's some war stuff going on. Because that movie was good too.

James Franco is in this movie (to further prove that he is an omnipresent God) and is good. This movie would gain points if it added more Lizzie Caplan, who was great in Tableau favorite Party Down and is only in a few scenes in this movie. In fact, none of the supporting players get much to do, and they're basically there as eye candy and so people don't get bored with the protagonist. It's this year's Into the Wild, but more 'dank cave' and less 'beautiful Alaskan landscapes'.  Plus, there's a happier ending.

Also, Joan of Arcadia is there for a little while, mostly just to remind us she still exists. And her traveling pants look great!

Of the films up for Best Picture, none is quite as whackadoodle as Black Swan. Though it starts off slow, it quickly builds to a frantic pace and doesn't let go until the final moments, the screen brightening to absolute white. Warning: Some language ahead NSFW
Like all the best picture nominees this year, the cast is pretty outstanding. Mila Kunis,

First up is Inception, a film that suffers from what we like to call "Avatar Syndrome."  That is, it's a visually stunning and fun movie that is hindered by the pretentiousness of the director.  With Avatar, James Cameron harshed everyone's buzz by constantly talking about how original and innovative the storyline was and how his amazing new technology was changing the landscape of modern film.  The movie is gorgeous, but the storyline is trite, many of the characters one-dimensional, and antagonists so evil they're more cartoonish than the doe-eyed N'avi.  Let's call a spade a spade.

Inception is similarly afflicted. It's beautiful, and a lot of the ideas

In the months leading up to the release of the last Harry Potter film, "Harry Potter and the Deathly Hallows: Part 2," we here at Tableau Your Mind will be going through the series one book and movie at a time.  Hopefully, we will be able to provide readers with a quick look back over the series, including important things the film left out, ridiculous things the films put in, dropped characters we were sad to see go and characters we were glad to be rid of.  First up in the series: "Harry Potter and the Sorcerer's Stone" the book (American version).  Look for a review in a few weeks when it suits us.