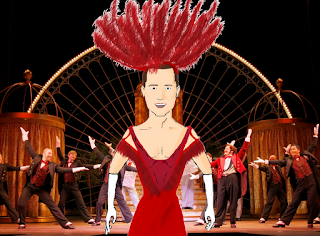 So, apparently Magic Mike, the stripper bio-pic starring Channing Tatum and Alex "unremarkable" Pettyfer, is already in the early stages of being made into a musical. No, I'm sorry, A MUSICAL (these are not spirit fingers - THESE are spirit fingers)! Now, this does bring our dream of seeing 'Carol' Channing Tatum one step closer to reality, and Tatum and Soderbergh have been tapped to produce it. Still, it all seems a little rushed. I mean, Newsies took 20 years to make it from screen to stage, and The Lion King took at least 3. Why the rush, Chi-Tat?

Also, it's been ages since anyone has talked about The Full Monty, and a Magic Mike-sical will, in theory, have more attractive people stripping.

I don't know, we're on the fence on this one. Thoughts?

My Mom Reviews 'Rock of Ages'

Rock of Ages, the newest rock-musical-turned-movie, was pretty much hated by critics and unceremoniously ignored by audiences. Who, exactly, is this movie for? Well, I wanted an answer to that question, so I asked the only person whose opinion matters more to me than my own: my mother.

Here is her opinion on Rock of Ages, dictated with approval:

Trailer Dump: This Is What We've Become 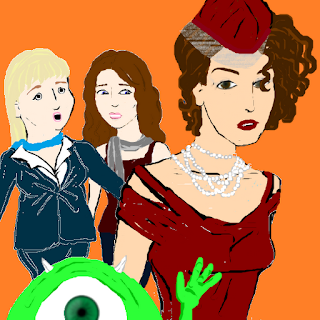 So, the last few posts that we've done have basically been excuses to link to something awesome on YouTube.  Which is cool and all, but at one point this blog was going to be a semi-humorous but in-depth look at all things pop culture. Where have we faltered, what have we become?  Ehh, screw it, here are some trailers for movies that we maybe want to see. We'll rate them and add some thoughts, because otherwise there's really no point:

I really hate for two posts in a row to be just links to YouTube videos, but seeing this super tiny teaser trailer for Life of Pi made me so excited that I had to post something.

Life of Pi the movie (directed by Ang Lee) is based of Life of Pi the book, one of the most stirring, emotionally daring, and thoughtfully melancholic pieces of literature that has been written. Ever. In terms of amazing, pseudo-biographies, I'm even putting it above the highly praised Matt Damon: An Unauthorized Biography (yeah, I went there).

Published in 2001 and written by Yann Martel, Life of Pi tells the story of Pi, a well-meaning boy tossed into the sea with a rag-tag bunch of zoo animals as his only companions. Where nothing is as simple or as dangerous as it once appears, Martel crafts a compelling world from the simplest and silliest of constructs. And it's devastatingly sad. Haunting, even.
I'm interested to see what Ang Lee does with the material. He's great at underplaying moments and creating tension through silence. So, as of right now, color me thrilled.

Disclaimer:
This movie contains the following uncomfortable subjects:
Hard to Watch Rating:
3 out of 5 (cringe-inducing) stars
Hit The Jump »

We've been ruminating on Snow White and the Huntsman for a week, trying to figure out how to accurately express our apathy towards this movie. When we first saw the trailers to Snow White and the Huntsman and Mirror Mirror, we worried that the film's super-seriousness would be its downfall (Spoiler Alert: it is). The film tells the classic story of  Snow White with a twist, but it does so in a very long, dull way. Since we really don't want to delve too deeply into the strengths and weaknesses of the film, we're just going to share some of our thoughts on the film:

Despite the epically-long runtime, very little happens in terms of character development. From the first ten minutes of the film, everyone is already emotionally in place for the final battle. Charlize Theron's Ravenna is super pissed and heart-hungry, Kristen Stewart's Snow

Tableau Your Mind recently had a somewhat-drunken conversation with guest blogger Square Peg about Christopher Nolan’s upcoming film The Dark Knight Rises. Mostly, we’re excited, but something about the film is still stuck in our craw.


We are very big fans of the first two of Nolan’s Batman films. We’re even willing to forgive him Katie Holmes, because everyone makes mistakes and we admit to feeling a little something for Joey back in our Dawson’s Creek days. We’ve also been fine with him taking Batman characters from previous Batman movies and reimagining them for his films. The Joker and Two-Face have both already been Batman villains in movies (played by Jack Nicholson and Tommy Lee Jones, respectively), but we have been pleased with Nolan’s reimagining. And we look forward to his interpretation of Bane, who was pretty forgettable in Batman & Robin.

However, we cannot, in good conscience, endorse Anne Hathaway as Catwoman, the role 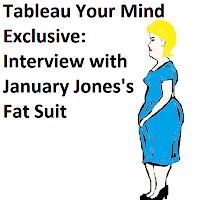 With the return of 'Fat Betty' Francis on last night's Mad Men, Tableau Your Mind sat down with January Jones's Fat Suit for a quick conversation on working with the Emmy-nominated actress, her previous vaulted career work, and what's next for her character on AMC's hit show.

Tableau: It's really an honor to sit down with you. It's been great seeing your work on Mad Men this season.
Fat Suit: Thank you, It's been a pleasure working with such amazing actors like Jon Hamm and Kiernan Shipka.

T: And January Jones?
FS: Sure, why not? You know, one thing I will say is that, usually, actresses get really hot when they're in me and tend to complain. With January, she never overheated. If anything, she got colder. I also loved the work we did in my second episode in that scene with Jessica