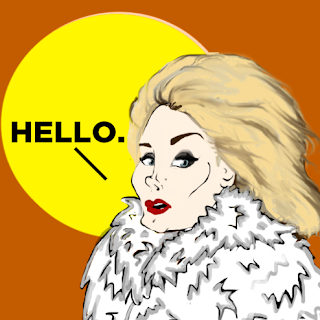 It's been over two months since I last posted anything to this blog. Work got busy, a baby took up all my free time, and I wasn't really in a mood to write. And then...

... someone went and woke me up again. That is, I had the extreme pleasure to see Adele perform today, as part of an iHeartRadio broadcast that should be airing any minute now. She was performing at Joe's Pub, the site of her US debut 7 years prior and my favorite music venue in the world.

She was amazing, both in her performance and the following interview. She's like a fun mix of Jennifer Lawrence;s relatability, Emma Thompson's goofy wit, and Shirley Bassey's pipes. Obviously, "Hello" has been playing on repeat in my apartment for weeks (and the houses and apartment of literally tens of millions of people), and her album, 25, has already had a few plays on the ol' iPhone. But I've never heard her perform live, and it's a truly incredible experience. Her voice is so powerful and pure, and the emotional resonance of her songs are so clear.


And then she's funny, too, in ways that are kind of unexpected. She drops jokes about motherhood and incontinence with equal aplomb, and her full-throated cackle is infectious.

She's a very personable artist who's created another incredibly personal album. Aren't we all lucky to be a part of it?

Now, if you'll excuse me, I'm going to collapse into a heap of my own emotions and listen to the album again.