'Game of Thrones' Returns in 3 Days!

Happy Good Friday, or, if you're not of the Christian persuasion, Happy Friday!   Easter is just around the corner, and that means...

...that Game of Thrones is coming back for Season 3!!!

Sure, Season 2 had its weak moments. Oona Chaplin's Talisa was a major misstep, and that character is still happening in Season 3. Still, this season has the White Walkers we were all promised in the pilot, and it seems like Jon Snow (Kit Harrington) and Danaerys Targaryen (Emilia Clarke) will finally have something to do after basically saying the same things over and over in Season 2 ('I'm a Virgin Soldier!' and 'Where are my Dragons?', respectively).  So, I'm excited.

Game of Thrones is back in 3 Days! Just like Jesus!

New 'Game of Thrones' Promo is Full of Dragons 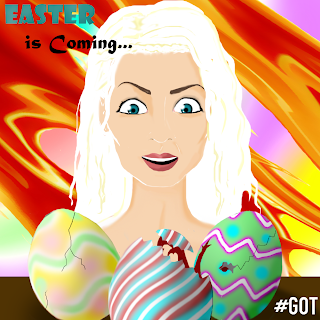 Easter is Coming, you guys! Game of Thrones returns this Sunday!!!!

Email ThisBlogThis!Share to TwitterShare to FacebookShare to Pinterest
with: Danaerys Targaryen, Easter, Emilia Clarke, Game of Thrones, HBO, Peter Dinklage, TV, Where are my Dragons? 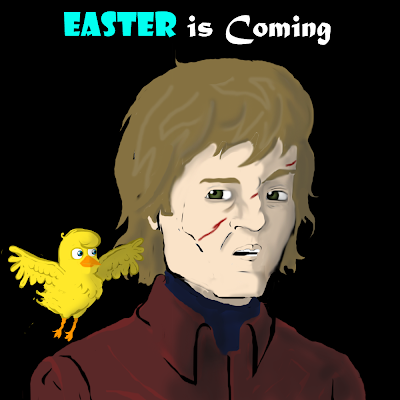 6 days to the Season 3 premiere of Game of Thrones,
which just happens to be Easter Sunday!
Tyrion Lannister is excited for March 31 - so should you be!

In case you haven't heard, Enlightened on HBO has been officially cancelled. When I first heard, the news hit me like an unexpected ROUS.

I went through some of the familiar stages of grief.

Honestly, I couldn't believe it.

The show has such a loyal fan base! Cancelled??

But what if I started a campaign to get it back on the air? Maybe it has a life on Netflix! What about Kickstarter?

Then, I just wanted to fight someone. Let some honcho know that they'd ripped out my still-

Between worrying about Enlightened's renewal, watching the strange second season of Girls, and anticipating the third season of Game of Thrones, I completely forgot that there was a new season of HBO's Veep on the horizon. Thankfully, the good people at HBO have sent a beacon in the form of a promo video, and it is great. Julia Louis-Dreyfus is back as Selina Meyer, the trash-talking VP who takes the ineffectual nature of her position and runs with it. Most of the cast seems to be returning, and Gary Cole is in this season in an undisclosed role. It's nice to see him back in the Oval Office, since he memorably played the Vice President in The West Wing for the last batch of seasons. From the video below, it seems like the President might be playing some sort of role this year, though hopefully he won't actually appear on-screen (he was unseen for all of last season). Check out the video, and get ready for April 14th:

The 'Veronica Mars' Movie is Happening!

There has been a lot of good pop culture news recently. The trailer for the new Hangover movie came out and doesn't look terrible, Joss Whedon's Much Ado About Nothing seems like it's going to be awesome (though it can never touch the majesty of Kenneth Branagh's 90s version), and Bunheads on ABC Family got renewed for a second season. No news, however, is quite as exciting as yesterday's announcement that there is actually going to be a Veronica Mars movie. Hinted at for some time by lead actress Kristen Bell, it all seemed like an unattainable dream until the Kickstarter campaign started yesterday morning. They were looking to get $2 million in 30 days, and they've already gotten $2.7 million in donations in a little over a day. So, yeah, this movie is happening.

Created by Rob Thomas (not this guy), Veronica Mars is a California-set neo-noir television series following a pint-sized sleuth (Bell played the titular Veronica) as she navigates the
Hit The Jump »

Liza Minnelli turns 67 years old today (67 with a V).  I've been thinking of her a lot lately, what with Arrested Development coming back and Oz the Great and Powerful being in theaters. Plus, one time I swear I saw her driving a UPS truck in central Indiana, and I love a girl who delivers mail. So, the least I can do is draw a picture of her saying my favorite line from one of my favorite movies, Arthur:

In honor of Women's History Month (or Womyn's Herstory Month), it is Tableau Your Mind's pleasure to present Bea Arthur, who was awesome in The Golden Girls and even better as Maude, titular character in the TV show Maude and one of the classiest, brassiest dames that television has ever seen: 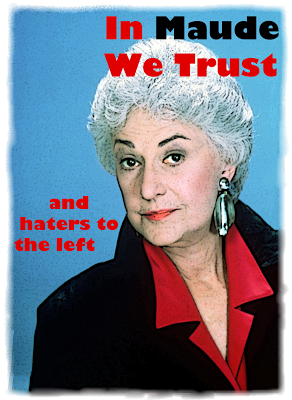