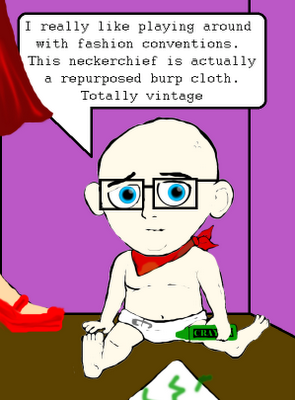 As long as it's not a white burp cloth, we think he's going to be okay.

Email ThisBlogThis!Share to TwitterShare to FacebookShare to Pinterest
with: Hipster Baby, Labor Day

Film Review: Sleepwalk With Me

There’s an odd phenomenon that occurs at movie theaters, usually during a movie’s opening week. At the end of the movie, apropos of nothing, people start clapping. For whom, I ask, for whom? Is it for the audience themselves, for enjoying a communal activity? Is it a congratulations to the projectionist? It always seems odd, unnecessary, and a little pompous. Well, finally, at the end of a screening of comedian Mike Birbiglia’s new film, Sleepwalk with Me, appleause actually made sense. Because Mike Birbiglia was in the

With death comes new life. Never has this been more true than today, when Neil Armstrong was successfully reincarnated as Jersey Shore cast member Nicole "Snooki" Polizzi's new son, Lorenzo Dominic LaValle. This represents a big win for the good people at NASA, who have been working tirelessly to perfect astronaut reincarnation since being inspired by a late-night viewing of Charlie Kaufman's Being John Malkovich in 1999.

The process has only been operational as of early 2012, and, when Armstrong died on August 25th, scientists worked quickly and efficiently to transplant his essence into the child in Ms. Polizzi's womb. There were some complications, which resulted in the baby being born slightly ahead of

Obsession of the Week: Garfunkel and Oates

It is time to name Tableau Your Mind’s 2nd Official 'Obsession of the Week,' and this time it’s an easy one. Because we are absolutely obsessed with Garfunkel and Oates, the singing comedy duo headed by very funny ladies Rikki Lindhome and Kate Micucci. It’s hard to say when we first fell in love with G&O. Was it when Lindhome played a bulimic dandy lion on Pushing Daisies? Was it when Micucci Scrubbed it up as Gooch, the adorable and ebullient girlfriend of sad sack Ted Buckland, or when she partied internationally with Kristen Bell in When in Rome? Or was it the first time we heard "Pregnant Women are Smug" and it effectively kicked us in the ovaries or the testicles or whatever reproductive organs that we have (we don’t know anymore)?

We’re not really sure where our love began, but we are sure that it was in full effect when we
Hit The Jump » 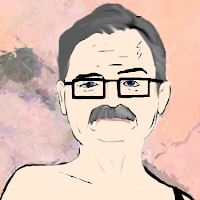 One of the best things about having a blog is being able to see what random search words get people to your site. That’s right, thanks to Google Analytics we can see what search words bring people here, and it’s not always pretty. Let’s just say that it’s amazing how the word ‘fluids’ can be easily combined with other words to make them sound incredibly NSFW.

Tableau Your Mind is a judgment free zone (except when we judge and analyze elements of pop culture) so we thought that it would be a good idea to combine all the most popular searches into one photo, because that's what people were clamoring for. Below, check out the seven most-searched items that brought people to this blog (along with links to the pages that they presumably brought people to). Then, click through for one of the most blog-search friendly images ever!
Photo is slightly NSFW, but it's a cartoon, so it's totally fine: 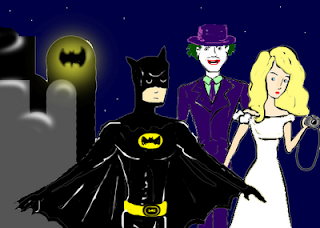 After we watched The Dark Knight Rises, the final film in Christopher Nolan's epic trilogy, we thought it would be good to go back through the seven films that have made up the modern Batman films thus far, starting with Tim Burton's Batman in 1989, continuing through Joel Schumacher's Batman & Robin (that temporarily killed the franchise) and ending with the Nolan films in the last seven years. How did they stack up to one another? Which was the best? And since we couldn't make up our minds alone (this was too important), we enlisted the help of tons of guest bloggers, friends, and colleagues to rate and talk about the seven films. Or, at least, we tried to talk to all of our guest bloggers - My Mom kindly declined, saying that "these are frivolous movies. I have no need for them." Harsh words, but, for the rest of us, here are the rankings:

Hanging Out With Tina Fey 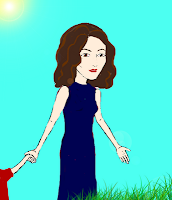 ...or, rather, hanging out in close proximity to Tina Fey. That was the wonder experienced by Tableau Your Mind when I went to the Delacorte Theater in Central Park to see Stephen Sondheim's Into The Woods. Since the musical doesn't open until today, I don't want to dwell on the show (the three leads are great, Amy Adams' comedic timing is a little off, the metaphors can be a little heavy-handed but the musical is nonetheless beautiful, etc.). Instead, I want to dwell on the amazingness of an actual sighting of Tina Fey, TV's most prominent female comedian and showrunner as well as a woman who shies away from public appearances. Because she's just like us!

It all happened because I Don't Feel Bad About It happened to use the restroom at the same time as her. I, on the other hand, shared a restroom with the guy who wrote Hair, who I assumed was a homeless person. Anyway, it's incredible the excitement that a public sighting of Tina Fey elicits. Not just in me, but in everyone around her. Vendors she spoke to, women she passed on the way to her seat, ticket takers, little boys and girls in glasses who wanted a picture with her. Obviously, I knew all of this because I was passively stalking her. Which was easy, since I was sitting 4 rows behind her for the entire 3 hour show.

I felt like Greta on 30 Rock, when she tells Liz Lemon that 'I know how much you like TV. Sometimes I watch you watching it.' There I was, sitting in Central Park, with Donna Murphy and Denis O'Hare acting up a storm in front of me. And I was watching Tina Fey watching it. After a few minutes I turned away, afraid of the stalker I'd become. And as I did so, I saw at least fifteen other people do the exact same thing, the moment of creepazoid clarity occurring at the same time, like how those two dudes invented calculus simultaneously. We were suddenly aware of our own voyeuristic tendencies, and it was just as terrible as calculus. Worse, maybe.

It's a weird culture we've built, that's for sure. 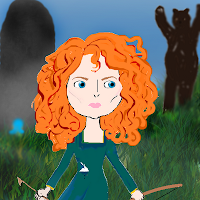 We've spent about a month thinking about Brave, and our review is this:

It's better than Cars and Cars 2.