Over the past two and a half series of Doctor Who, the Doctor, Amy, and Rory have had quite a few adventures. They've saved tons of people's lives, including a Star Whale, Silurians, and, of course, humanity. And they have done so by fighting, running away from, and trying to understand their many antagonists. In honor of Amy's last adventure with the Doctor, we're looking back at the best villains, the ones who have affected Amy the most:


5. Daleks
The Daleks have found their way into many of Amy Pond's adventures with the Doctor, and each time they manage to be just a little bit more terrifying.  As the Doctor is fond of saying, they are his oldest and greatest enemies. First, they were Winston Churchill's secret army
that turned bad, then they arrived at The Pandorica only to be fossilized (and then one mortally wounds the Doctor), and finally they lure the Doctor, Amy, and Rory onto a planet that houses the craziest Daleks and introduce a creepy new power - taking over an entire body (living or dead). We admit to finding the Daleks a skosh ridiculous in many of their appearances. They're always fooled by the Doctor, kind of goofy (their technicolor makeover in Series 5 didn't help), and pretty easy to defeat. In Series 7, though, they were terrifying, in the same way Cybermen became terrifying when the conversion process was revealed. Also, the Daleks are on this list for what will probably be a pattern - Amy was almost turned into one. Freaky.
Notable Appearances: "Victory of the Daleks" (Series 5, Ep. 3), "The Pandorica Opens" (Series 5, Ep. 12), "Asylum of the Daleks" (Series 7, Ep. 1) 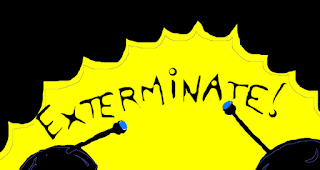 4. Faith-Eating Minotaur
This Minotaur is not really scary at first. At a glance, he's just an old beast, who uses his magical hotel to frighten and kill people with their greatest fears. But the real mechanics behind the Minotaur are much more insidious. He uses fear to get people to fall back on faith, and then he converts that faith into faith in himself, which he then eats or something. Like the best stories in Doctor Who, the Doctor doesn't understand the monster at first and is inadvertently responsible for the deaths of many of his cohorts.Then, the only way for him to defeat the monster is to make Amy lose her faith in him, thereby severing the bond between the two of them. This Minotaur itself isn't that frightening, but what it represents (faith in the Doctor only leads to destruction) is powerful, indeed. Praise him.
Notable Appearance: "The God Complex" (Series 6, Episode 11)

3. The Flesh
There's nothing more frightening than a human. The Doctor is often surprised by their generosity, but more often than not he also has to endure their failings. All of this is brought to the surface in the Series 6 two-parter that explores what it means to be a person. The Flesh, also known as "gangers" (short for doppelgängers), are human replicas that allow humans to do dangerous tasks from the safety of an uplink pod. When a solar tsunami disrupts the brain hookup, the Flesh break free from their human counterparts and begin a small uprising. The Flesh have the same memories as the humans, feel the same experiences, and Amy has to figure out what makes a person a person. Her journey with the Doctor (and the Flesh version of the Doctor) are fascinating, as are the eventual way she comes to terms with her feelings. Of course, there is also a proper villain in this episode as well, the Flesh version of a girl named Jennifer. Everyone starts in a philosophical grey area, but, when a human murders a member of the Flesh, Flesh Jennifer goes all wonky. She becomes more murderous and manipulative, and her form shifts to that of a weird waxy monster. The real enemy, though, is perception, which the audience learns in the final moments. Amy is revealed as a Flesh version of herself, with the real Amy being trapped on a spaceship miles way. When she melts into oblivion, everything we thought we knew about Series 6 melts with her.
Notable Appearances: "The Rebel Flesh" (Series 6, Ep. 5) and "The Almost People" (Series 6, Ep. 6)

2. The Weeping Angels
This enemy, which terrifyingly first appeared with the 10th Doctor and Carey Mulligan, has appeared multiple times during Amy Pond's tenure with the Doctor. These supposedly stationary statues are actually killers who can only move when nobody is watching. In their first appearance, their threat to humans was simple - their touch transports people back in time.  However, in Amy's first encounter with them, they became a little more terrifying and a lot more complicated. They can enter into a person if she holds their gaze, anything that holds their image becomes an Angel (please, put away your camera phones), and they break people's necks and use those people's voices to communicate. Of course, Amy almost becomes one, since she stares too long at the image. Doctor Who loves to expand the mythology of its villains on each appearance, and we fear that, at this point, the Angels may be a bit too complicated to defeat. Since they are scheduled to appear in the final chapter this Saturday, we dread what's in store for Amy, Rory, and the Doctor.
Notable Appearances: "The Time of Angels" (Series 5 Ep. 4), "Flesh and Stone" (Series 5, Ep. 4), "The Angels Take Manhattan" (Series 7, Ep. 5)

1. The Silents
(and the Silence)
Is there anything creepier than an enemy you can't remember? Yes, if that enemy also sleeps upside-down like a bat, makes a sucking noise like a Dementor, implants subliminal messages in your brain, has a face that looks like skin pulled over a skeleton but with elephant eyes, shoots electricity from its hands, and is part of a religious organization that brainwashes your daughter into becoming a killing machine. These things are mad creepy. Add in the diabolical Madame Kovarian, who is super creepy, and you have one great baddie.
Notable Appearances: "The Impossible Astronaut" (Series 6, Ep. 1), "Day of the Moon" (Series 6, Ep. 2), "Closing Time" (Series 6, Ep. 12), "The Wedding of River Song" (Series 6, Ep. 13)

That's our list of Amy Pond's greatest foes. Agree with the list? Disagree with the order? Let us know your thoughts in the comments below!


Oh, and here's the cast of Doctor Who discussing the same thing: