I love Jurassic Park. I love it so much. From the first time I watched it (in the basement at the house of my sister's friend, clinging to the arm of a two-tone couch), I was hooked. I have always been fascinated with dinosaurs. I wanted to be a paleontologist so badly when I was in elementary school, and this movie was a natural extension of my prehistoric curiosities. So, when Jurassic Park came back out in theaters, I knew that I had to see it. And I also knew that there were only two people I needed to see it with – my two cousins, whose excitement about movies matches my own and whose childlike wonder I could hopefully feed off of (but not in a creepy, succubus way). Herewith are their/our thoughts (Spoilers Ahead):

Cousin #2: It was awesome! I would definitely give it 5 out of 5 stars

Nothing. So, what did you like about the movie? What was your favorite part?

C2: I liked the part in the beginning, with the kid who says "it's just a 6 foot long turkey." It was funny and then it got scary.

C1: I liked the kitchen scene. I liked it because it was full of surprises. It's actually a suspenseful scene with the kids in it, so the field between kids and adults feels more balanced. I liked how cool the tapping claw looked and sounded.

C2: I liked the part when the T-Rex is attacking the children and the other guy tries to save him.

C2: Yeah, that part was crazy, and there was so much yelling.

Yeah, his arm was presumably all that was left of him. He got 'raptored.

C2: Oh, I didn't think that was an African American arm.

Nope, it was Samuel L. Jackson's. Check the tape.

C1: Oh, that's why the John guy told them to go to the bunker until he returned, and then he never returned.

Exactly. So, what was your favorite dinosaur?

C1: The Velociraptors were definitely my favorite. They looked scary, and their intelligence made them even scarier. I liked when they turned the doorknob in the kitchen. Plus, they have that big claw.

Yeah, you mentioned. And they definitely kill the most people.

So, from what you mentioned, it seems like you enjoyed the scenes with the kids. Were they your favorite characters?

C1: NOOOO!!! I didn't like the way the girl always screamed and yelled, and I hated when she turned on the flashlight for no reason.

C2: The girl was a little whiny. She was like, "*whimper noise*, there's a T-Rex, *whimper noise*!!" all the time.
In her defense, there was a T-Rex attacking her. I’m not sure I would have reacted any differently.

C1: Yeah, but she was whiny even when things weren't that scary. 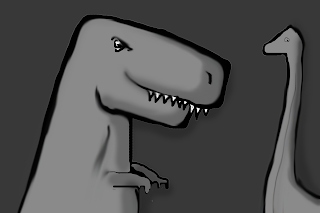 C1: Right!? Even herbivores made her whiny. Dr. Alan Grant (Sam Neill) was definitely my favorite character. He seemed cool from the beginning, when he made the kid scared about raptor. I liked John Hammond (Richard Attenborough), too, because he was funny. And I liked his walking stick.

Well, she's smart, and caring towards the Triceratops, and she's just really good at screaming.

I think Wayne Knight would be a little upset that you're saying that.

C2: Well, he is. I think the scariest part of the movie is when the dilophosaurus kills him. It's scary because the weird umbrella skin flaps that the dinosaur has. It's freaky.

C1: He looks like that weird lizard that exists today with the same umbrella thing. Maybe one evolved into the other.

I think it's called 'frill', but I could be wrong.

C2: So, then, this movie is possible? Can this really happen? It seems like it's possible if you're really smart.

C1: If you can find really good DNA. Like when they were going to clone that mammoth.

Well, I think that maybe the movie shows that it wouldn't be a good idea to mess with nature.